Join our EDU-210: Configuration- and Cyberthreat Management training to learn more on how to protect your network effectively
or let us know if we can help you. 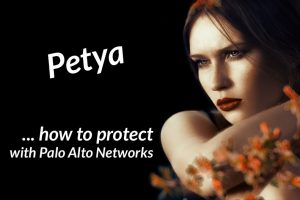 It took longer than I thought, but here it is, another ransomware outbreak making it into the prime time news as it utilises the EternalBlue exploit (CVE-2017-0143 to 0148) to spread blazing fast through enterprise networks. From a security protection point of view its feels like a déjà vu, so here are again all the things you need to protect against this nasty ransomware using the Palo Alto Networks Security platform.

Stage 1 – initial infection of the first device
In the first stage, a device gets infected with malware. In the case of Petya, there is no proof yet on how the initial infection exactly happened. There are numerous possibilities, like for instance, a malicious Word document distributed in phishing e-mails which is the classical threat vector for ransomware these days. However, based on what we have seen so far, with so many attacks happening at the same time, it is hard to believe that users in so many companies opened a malicious e-mail attachment, and nobody has evidence of these e-mails. My personal theory is that the threat actor behind Petya simply bought access to devices that were infected with malware and, with this, was able to check if the Microsoft patch was already deployed in its victim’s network. This wouldn’t be unusual as today’s cybercrime is very well organised with hackers specialising in specific attacks like infecting devices, deploying a remote access Trojan and then selling the access to others. What is clear in any case is that you have to protect your network from the initial infection. So let’s explore the most common possibility.

Victim: A user receives a phishing e-mail with a malicious Word attachment

Contact us or give us a call +353 (1) 5241014 / +1 (650) 407-1995​ – ​We are a Palo Alto Networks Certified Professional Service Provider (CPSP) and the Next-Generation Security Platform is what we do all day every day. Let us share our experience with you to make your Next-Generation Security project a smooth experience but most importantly a peace of mind by truly securing your valuable IT assets.

This document is licensed under a Creative Commons Attribution-ShareAlike 4.0 International License. You are free to share and adapt this document as long as you give appropriate credit to the author Lars Meyer. If you remix, transform or build upon the material, you must distribute your contributions under the same license as the original.

Disclaimer: Consigas Limited accepts no liability for the content of this blog post, or for the consequences of any actions taken on the basis of the information provided. Any views or opinions presented in this document are solely those of the author and do not necessarily represent those of Palo Alto Networks.